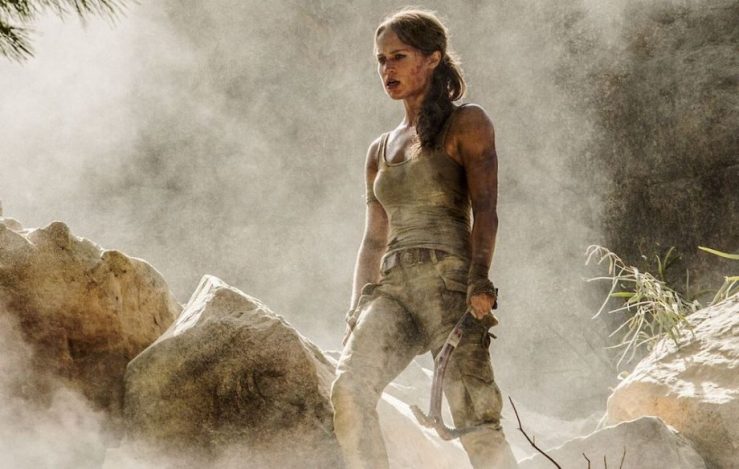 Uthaug and team noticeably shoot and edit movement with more enthusiasm than they do bodies moving through spaces, and as a consequence the film’s two most engrossing action pieces come early in the film with the dramatically mundane bicycle race and boat chase. If this generation’s Lara Croft was an off-brand superhero then movement-as-movement would suffice, but instead she’s written to be brave yet humanly vulnerable, obsessed to the point of self-destruction. This Lara was born to the same era of fetishised survivalism that emphasised the gravity of violence in The Last of Us and sustainable butchery in open-world environments elsewhere (retrievable arrows and knives, plants and hides for crafting). With Tomb Raider writers Evan Daugherty and Geneva Robertson-Dworet gesture to the ‘grit’ of something like War for the Planet of the Apes, but ensure that as a creation myth Lara is defined less by reaction than a series of positive movements instead.

Reaction/action in an action film might sound like two ways of framing the same thing, but Uthaug takes the difference seriously. When it is narratively/emotionally critical that the film start closely observing spaces and Lara’s place in them (so as to anchor events/decisions to her mortality and improvisational capacity), the director quickens things to the extent that it almost becomes abstract again any way, a bobbing of heads, a fluidity of pivoting glances, an environment always in motion. We’re never glued to Lara as a broken body in a hostile environment; instead we’re wired directly to her heart rate, waiting impatient for the moment where she can become one with that sense of movement, in sync with the film’s progress and environmental charge. Uthaug is so concerned with making her a channeler of energies that the human dimensions to the character are entirely for Vikander to embody. She’s proud enough to conceal her fear, but not convincing enough to distract us from the tangible objects of her worry. The improvisatory element of her character is key here- by no means Jackie Chan level panic, but enough that we’re actually convinced that she could die at any moment, and she knows it. This same pride creates a kind of mask for her tragic madness- to be potentially followed up at a later date, but Vikander plays it inscrutable so as not to take away from any of the victories herein. When the film queues reflective Moments they’re even half convincing thanks to Vikander’s doubt and panic whenever her momentum’s obstructed.

Daniel Wu’s Lu Ren is given more personality than any romantic interest slash sidekick in recent memory (as well as an uprising narrative following his own father’s legacy as Croft pursues her’s), and Goggins oggles in a fixed concrete way while moving like water, making it impossible to know whether he’s in control of the situation or a skeleton lost to lonely madness. The film is full of these sources and negations of power- we know that as an origin story we’re still at the bottom of the ladder when the film closes, but we’re able to glimpse across at weird figures like Vogel and even Richard and wonder how stable any of this is. Old money is linked to sketchy multinational businesses both of which are invested in boring front companies making everything from weapons to canned goods, and secret societies slash militia with ancient ties to the Catholic church. The contemporary touches are a bonus- it’s been observed that said militia are rando crossfit bros, and Lara’s in a situation where it’s either inheritance or working for Uber Eats. Tomb Raider is not the traumatised body horror that the source material requested, but it’s a film so imbued with goodwill and kinetic thrills that it’s infectious, setting a joyous and unexpected rhythm for future journeys into the material.