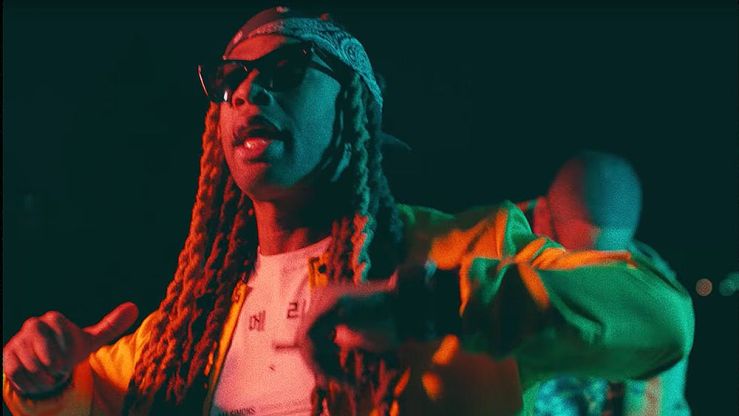 Ex was fortuitously released just in time for the hottest summer on record in like 200 years, but it arrived feeling as though it had already soundtracked the (imagined) last twenty summers of the listener’s life as well. Perhaps an insurance move in a ruthlessly accelerated age, it feels like the kind of song that has recently started to appear on throwback playlists by pop culture tastemakers, and that the listener was always familiar with but considered minor until its low-key ascent. Like the best pop songs it sounds like it wants to be throwaway, adhering to the reverse logic of pop music that a disposable few minutes means minutes of ecstasy emblazoned in eternity.

The song’s bassline brings to mind the kind of Cameo-inspired beat Pac would’ve employed for a crossover hit (in reality 112 got to it first), and the guitars squirm like vintage DJ Quik. Its timeline as a period-piece is complicated by Ty’s chorus which plays like Pac contemporaries Jay-Z and Snoop’s early-mid 2000s singles runs orchestrated by The Neptunes. What would have already sounded sunbaked and wistful in 1996 would have been doubly so when 1996’s veterans sunbaked themselves in 2004, and so hearing it reappear a decade and a half later without the constancy of a veteran threatens to destabilise the illusion altogether. What seals it here is the presence of YG, who is one of the more successful time-traveling mid-90s Compton rappers since The Game appointed himself 90s Compton hagiographer over a decade ago. The presence of new generations of retro-gazers delivers on the game’s morbid wish, authenticating his signifiers and burying him with his heroes. YG is less highbrow than his west coast Top Dawg contemporaries and certainly not as out-there as what is happening in the south (and has been happening for decades), and so stands in for a kind of nostalgic conservatism that fans’ll argue isn’t there, but which the rapper certainly fosters on the surface(s). Unsurprisingly in Ex, inserting time-traveling rappers into a triply simulacral beat yields good results when time’s been stretched to the point it’s lost its elasticity. YG’s verse on Ex is present but insubstantial, and is made even weaker when he’s interrupted 3/4 of the way through by Ty who cuts him short, and then allows YG to come back for an uncomfortable fraction of a bar. It is the kind of verse that might have happened to a legit mid-90s Compton rapper on a legit mid-90s r&b track, or that a big name might have phoned in c. 2004, and as such is authentically a non-event that receives both more and less visibility than one might expect.

The thing that stands out as unusual however is the angle of the lyrics. Ex is an infidelity sing-along, but where someone like Pac would dedicate the song to a woman he was in awe of for her confidence and inability to be tied down, Ty and YG boast about their power over people who are absent from the song: silent, almost hypothetical. Adultery-as-virility in music is a well worn trope, but for some reason the sunshine r&b format makes it all ring as corny, like Ty and YG have transformed into two guys in Hawaiian shirts running their mouths to anyone who’ll listen that it’s Christine’s turn to look after the baby and hence they’re gonna live it up just for tonight. Where Pac needed specificity to craft characters, Snoop removed all traces of it for getting blown in general. Ty and YG sound like they want the vibe of the latter but end up tangled in the details of texting to say they’ll not be home and bumping into exes, and this unlocks a weird mundane domestic image that feels sad instead of celebratory. What was Ty’s unfinished business with this woman? Who ended it? Is his going back to her an autodestructive move to exit a relationship in which he feels trapped? In his words she gets him thinking about the old days, signalling that he’s invested in her this image of a better past and he’s willing to ruin anything to feel for a moment like it could be real again. It’s more Woody Allen or Judd Apatow than thug passion. There’s as much to be made from this fantasy of running into an ex/the past incarnate as processed through a droste effect of sunbaked wistfulness as the listener is willing to indulge for Ty, as well as what this means in terms of a song that keeps turning up to have us compare the state of our life to the last time we heard it. When it disappears from radio it’ll either be resurrected by Grand Theft Auto 15 or lurk in the basslines and accidental melancholies of every Ex that came before and after this long hot summer.

The bonus is the video which cuts between a standard (artificial) cinematic mode and brutal digital footage of streets and lowriders that no shit brings to mind Michael Mann: When we did Collateral, it was the first photoreal film shot digitally. You cannot capture night photochemically. Very shallow depth of field, very pretty, diffused, defocused lights; exposure-wise, you can’t get that crazy magenta sky you have in L.A., when the sodium vapor lights are bouncing off the marine layer that’s about 1,200 feet at that time of year, and the soft illumination of magenta and orange is very alienating, very attractive, and lonely at the same time.