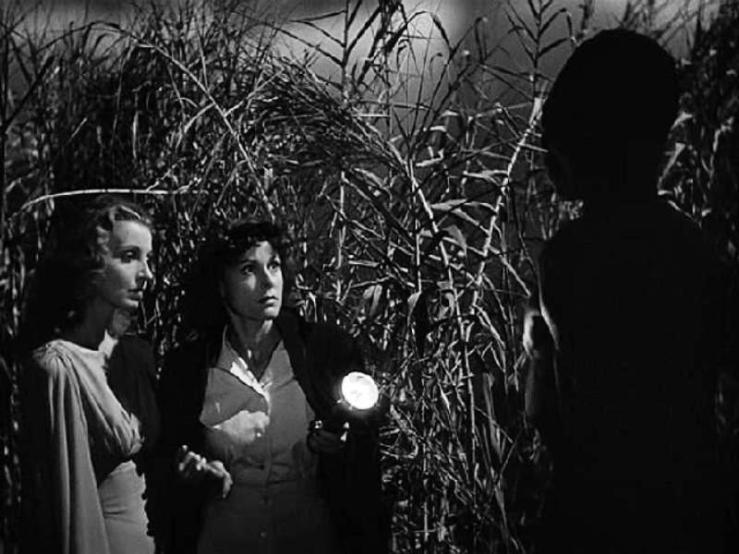 I Walked with a Zombie (1943)
Dir. Jacques Tourneur

In spite of scientific, philosophical, and historical insistence to the contrary, the belief in a single set of values and binaries presented as an objectively True Reality was and still is upheld and imposed on others, often by those with access to said scientific, philosophical, historical insights. This contradiction is simple when we look at colonial encounters- the contrast in belief systems between colonists and indigenous peoples make clear the fact that we should be talking about different worlds rather than just different perspectives on the same plot of land. A more complicated network of conflicting and complementary worlds emerges where indigenous peoples are wiped out by colonists who then kidnap people from their home-worlds and enslave them in the New World.

I Walked with a Zombie is written and paced like a step by step mystery romance, but its narrative comes already undone by a hazy free-associative world of connections, echoes, and ambiguities. As such it is difficult to engage with in any way other than pulling on threads to see which others go taut or slack, and to call out and listen for the answer.

The film takes place outside of the War, but the War is ever present. It takes place away from but within earshot of the War. It is said that the First World War created hell on earth, with the geographical scope of conflict expanding but nationalism and genocidal machineries condensing time and space leading to a rupture. We see in this period unprecedented masses of people traversing different worlds- they begin in small towns cut off from a large world, and suddenly they arrive in hell and they see more bodies than they have ever seen in one place, in the mud and sticking out of shallow graves and with their guts strewn over fences.

There has been significant work on the differing ways that colonisation and World Wars are accounted for in traditional histories. Colonisation, it is said, is treated as history, whereas it is insisted that we remember the World Wars personally. Memory is something we travel to and from constantly, whereas history is a series of linear narratives that we can look at from a distance and forget once we are done with them.

These people went back to their home-worlds and influenza killed twice as many as the War did, and then two decades later they were invited back to hell again. The zombie here is those who are living after the war, who are living and dead and who relive their friends being blown apart because to forget them is to leave them behind, so they see their friends die and come back to life a hundred times every day. The zombie is the hope that your loved ones will return from hell back to your world when this is over, but it is also the hope that your loved ones who died in their beds at home (where things are meant to be safe) from the flu will just rise up from the grave and lie there bedridden again forever.

James Cook conducts himself as Enlightened and non-judgemental to the peoples of the Pacific, and in one episode, as a result of a misunderstanding, he loses his temper and fires canons at a group of Tahitians. A member of his crew looks down to see a Tahitian man looking at a woman torn in half by a cannonball, floating in the water. The man is not mourning, because he cannot believe what he is looking at. We see multiple worlds overlapping, and we see a person looking at a person looking at a dead body: how can anything just tear a human body right in half?

There is this white New Zealander a hundred and forty years later who says that he arrived at the Western front and a new gun was wheeled out and before he knew it his friend was just wet pink air save for the tragicomic (it’s not funny but he’s laughing as he tells it) exclusion of his boots with his ankles still sticking out, both coloured red. How can anything tear a human body right in half?

So that’s memory, they insist, and here’s history: people are kidnapped from their home-worlds and beaten and starved and they arrive at a place and they say Whose land is this? and the kidnappers say It is ours, and they all see the people that lived there and built their lives there dying of these diseases, and they see their worlds flickering with them. Your world is gone, they tell them, And this is your world now.

The colonists belittle the idea of Te Po (the world of darkness and ancestors) on the basis that the only world is the one that can be observed and understood scientifically. They then go on to tell the Maori about their god whose name is God and who is invisible (they are of course mocked for this). It is strange how much of I Walked with a Zombie looks as though it is taking place at day time, when reference is made to it being night.

Cook, unlike his crew, was not appalled by any of the rituals he encountered on those voyages, explaining that European customs would seem just as strange to the people of the Pacific. His ‘non-judgement’ was not irregular among Enlightened colonists, because the truth is that these people had access through their knowledge of anthropology, philosophy, and scientific discovery, to as many different worlds as they desired, and they knew well that no particular world was any more or less True than any other.

The Royal Society’s instruction to Cook was to observe the transit of Venus, to chart territories unaccounted for, and to find the unknown Southern continent (thus making the world as they knew it smaller). The other instruction was to seize as much land as possible from these ‘savages’ who were of course not being judged as lesser or interfered with. A world liberated from imperialism becomes a tool of imperialism, and is in itself imperialist. Mrs. Rand tricks slaves into working harder by imitating and using their beliefs against them. She can see in and out of multiple worlds, but what she doesn’t expect is for hers to start cracking up.

The dead can’t just up and walk! Except they do, as we’ve seen. Lazarus rose from the dead and stunk like a corpse. Saint Sebastian was shot full of so many arrows he ‘looked like an urchin’ but he got up and found Diocletian (who then beat him to death and dumped him in a sewer). The symbol of Saint Sebastian in the film seems like a non sequitur, but is it possible to think of a slave ship without also thinking of people thrown overboard and drowning? Symbols like any other thing are never fixed- they come and go and take on new meanings depending on who needs them and to what ends. The thing here is martyrdom, and rising again.

It is common for prophets to adapt ideas and imagery from the worlds of European colonists in order to fight for a new world invariably born post-encounter. ‘We will use your weapons against you.’ It is common for people who have been forcibly made to forget their old worlds as they were, to remember what they can and add what is necessary from the colonial world to make something new that is connected to the past. Nobody walks out of this with their world entirely intact, forgetting about the others they encountered.

This world outside of the War is full of sleep instead of fear and rage, but its worlds are collapsing every second. The thing contextualising it outside of itself is slavery, and not the War at all. I Walked with a Zombie, against imperial histories, presents the War as history and slavery is memory.

What do an abusive Brontë villain, an American used car salesman, a Canadian nurse, and an English colonist all have in common with Voodoo practicing slaves on a sugar plantation? A shared history that can’t and won’t be forgotten: I Walked with a Zombie.