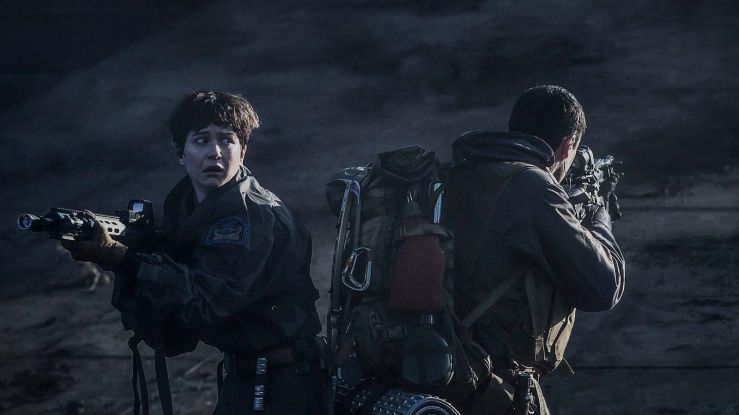 Super distressing to the point of being like really really depressing? In William H. Gass the author is God because they Create the world out of Nothing, and in Covenant Ridley Scott wonders going on from this what kind of God would be cruel enough to give life to anything, so he names it The Devil, gives it a face, and empathises with it. Bonds are made to be severed, crowds collect for genocide, bodies are born for dismemberment, and faith is offered to be shattered. Or faith is offered to those who are most hurt by this ostensible reality as it stands and want to find God somewhere else, and now this is what God looks like. It is for those who will least like what they see then. This is the film. Covenant is not just about making horror- any creator fits- those peddling soaps and other televisual comforts delegate terminal illnesses to those least able to cope and hack the foundations of the thing until it’s unstable enough to entertain the spectators for whom misery is a kind of fireplace.

Ten years prior to Covenant the ever-masochistic Michael Haneke condescended horror audiences by making the case that his brand of sadism is I don’t know superior or truer than theirs, but ignoring that, Funny Games foregrounded the audience’s role in the work’s creation. Just because God sees us doesn’t mean there’s any compassion in the glance. Following the reception to Prometheus, Scott doesn’t treat us like co-authors, but like a petty group that needs, like the subjects he has built/trapped/tortured, to be punished. To be mocked! He asks repeatedly Is this what you wanted??? And we kind of say Uh well yes but maybe not in this way! I liked Prometheus‘ portentous weirdness but that’s beside the point- nobody’s spared, and in fact in true Covenant fashion, those of us who liked that film will be most horrified by what we find here. In an era of ‘well produced’/’satisfying’/’entertaining’ design by committee epics, it stands out as the kind of film that could only be made by an upset individual with absolute control over what they are doing. That it is a film about precisely this is kind of humorous but still upsetting.

It is not nostalgic for a past where works were made by auteurs (worlds were made by (singular) Gods), but it is an individually horrible shriek through contemporary blockbuster cinema. Returning to that first moment of encounter is impossible and so we do not miraculously ‘discover’ (now familiar) horrors as we did the first time we saw Alien, but just see them re-presented, and the ‘stoner philosophising’ of Prometheus is not something we the audience do with the characters this time, but watch from afar. So long as we are with Scott then hope and discovery are impossible, and like his characters going through a crisis of faith, when we ask to see our creator he takes us directly there, to David, and David walks us through his laboratory of suffering and says Welcome! before, of course, hurting us. Emphatically unpleasant.